The Robert E. Cook Honors College at the Indiana University of Pennsylvania is a community of scholars who debate philosophical questions. Each semester is divided into two units, each focusing on a different core question. For Unit C, the third unit, I was given the opportunity to answer, “How do we understand art?” with the guidance of Dr. Christian Vaccaro, an associate professor in IUP’s sociology department. Throughout the course, we assessed five main aspects of various art worlds: collaborators, conventions, resources, distribution, and judgement. To conclude the class, students were asked to produce a thesis paper applying these concepts to any art world. I would like to thank Dr. Vaccaro for allowing me to share my work on Engaged Sociology.

An art world is a combination of everything that goes into a production. Collaborators, conventions, resources, distribution, and judgment all contribute to the formation of an art world. YouTube, for instance, can be examined as an art world. The site was initially developed as a way to easily share videos with friends. Then, YouTube become a user-friendly way to find music and movie clips. Today, countless videos can be found on the site covering all topics. Many people use YouTube to publish vlogs, blogs in video format, and attempt to make a career out of it. However, a problem arises when members of the YouTube community believe that their videos are of such a quality that a career can be made of them. YouTube was not intended for making a profit or becoming famous. Art worlds are created to be enjoyed. Art cannot become commercialized without losing a part of its authenticity. Unfortunately, YouTube has become plagued with vlogs and advertisements with the intent of making, not earning, easy money. Thus, YouTube should be used recreationally, not as a platform to start a career.

The fact that it is so simple to access YouTube leads to there being numerous collaborators within the art world. A collaborator is defined as any person who is involved in the production and distribution of a work. Everyone with internet access could be considered a collaborator; anyone can post a video covering any topic which then contributes to the online catalog. Specifically, however, the stars who post vlogs on YouTube are considered to be the artists. Although each video is a separate entity, they all work together to build the art world that is YouTube. All of the artists creating videos band together for the sake of establishing a community for themselves, as well as their fans. Unfortunately, the easy access of the website can create a problem: there is nothing to stop unqualified people from posting subpar videos. Due to this, there is a plethora of people who think that have what it takes to become famous based solely on their vlogs. On the contrary, the ratio of total vloggers to famous vloggers is very small. Collaborators also include technicians and support staff. Often times the star will have people to assist with the technical and editing aspects of the videos. The vloggers regularly solicit friends or other people in the field to collaborate on videos.

The conventions of an art world are the standard set of rules that the artist follows. While conventions can be constraining, they mainly guide the art world; they give the artist an outline to obey and the viewer an expectation for the content. Within the world of YouTube, conventions evolve over time. When one vlogger pushes the limits with his/her posts, many other artists follow suit. Thus, the standard expectation, or convention, is altered. A great number of YouTube stars identify as “lifestyle bloggers” which entails making videos simply about their lives with some jokes sprinkled throughout. Ultimately, these stars are not doing anything but documenting what is happening in their lives but they only display the positive aspects of their days. These vloggers create a community for themselves and interact with one another. The sense of community creates an aura of popularity which naturally makes the vlogger feel good about him or herself. This validation makes viewers envious – they want to join the community of perfect YouTubers. On the contrary, the life of the star is not as glorious as it may seem. Vloggers have the ability to hide the less than perfect parts of their lives. So, the general population needs to realize the disconnect between YouTube stars and actual fame.

Resources include everything required for creating the videos. Obviously, a computer with internet access is necessary for becoming a YouTube star. In addition, investments are made in quality cameras and software for the productions. Thus, money is required to be able to obtain the necessary materials. Not only that, but money is also needed to compensate collaborators who contribute to the production of the vlogs. The life of a vlogger may seem glamorous but often times their bank accounts suggest otherwise. The fact of the matter is YouTube videos actually generate very little profit. In order for the YouTube corporation to pay somebody for their content, the video must receive several thousand views. Not only that, but the video has to be watched to almost entirely, including advertisements. Even then, the profit is minimal. Social media stars make the majority of their money from ads: exactly what turns viewers away.

Some companies may choose to sponsor a YouTube channel. However, companies will send products to vloggers with the expectation that the vlogger publishes a video giving a positive review of the product. While “free” products are enjoyed, they don’t pay the bills. Very rarely does a company offer a financial sponsorship. In order for this to happen, the YouTube channel has to be extremely popular. Unfortunately, viewers are not fond of their favorite vloggers just posting reviews in order to benefit themselves; the fans see this as a sellout.

Similarly, viewers do not enjoy being forced to see an ad before the content they are looking for. Making a profit from advertisements involves more than the ad simply being present. If fact, revenue is dependent upon the viewer’s interactions.  There are two popular types of ads: cost per click (CPC) and cost per view (CPV). CPC generates more money because it requires the customer to actually click on the ad, taking them to the product website. If a viewer watches thirty seconds of an ad, the YouTuber receives credit for CPV ads. If the advertisement is under thirty seconds, half of it must be watched to receive compensation (“How Many Views…”). 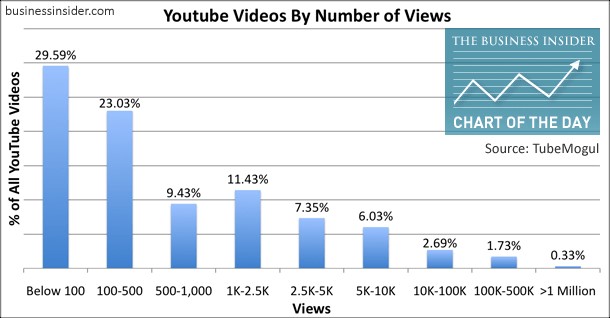 Distribution is defined as the way in which the videos are publicized. Distribution in this art world is straightforward: the public watches video content online. As technology evolves, so does the distribution system. People can access YouTube from smartphones, tablets, smart televisions, and gaming consoles, as well as the traditional desktop computer. Without a functioning distribution system, not only would YouTube be useless but all art worlds would be due to a lack of viewers. Distribution also deals with the way in which viewers interact with content, as mentioned previously in regards to advertisements.

So, vloggers are stuck between a rock and a wall: support themselves by commercializing their videos but loose fans or maintain a large fan base but be financially unstable. To even further the issue, these YouTube stars struggle to hold down a regular job for a number of reasons. Primarily, creating the videos requires so much filming and editing that he or she doesn’t have the time or energy required to work a regular job. Consequently, the social media posts take priority, leading to more and more financial problems in an effort to become famous. When the YouTuber is able to work a stereotypical job, there is an issue with dedicated fans trying to meet their idols. These fans have been known to memorize the work schedules of the celebrities and disrupt their workday (Dunn).

Everyone with access to YouTube, which is the vast majority of the population, has the ability to judge the content. However, like all art worlds, there are experts within the field which have more authority in determining which videos are at the top of the line. Specifically, YouTube Awards are given out annually as formal recognition of what the population deems as the best video. Executives from the YouTube cooperation select a number of videos from the previous year in an array of categories. Then, the public is to vote on the nominated videos, leading to the naming of the best YouTube video of the year. YouTube is unlike other art worlds in that the public has a significant say in the professional judgment of content.

Posting videos on YouTube can easily reach an immense number of people, which suggests it would be a good way to spread vlogs. However, due to constraints such as time and money, YouTube should not be relied upon for fame and wealth. YouTube is intended to be a social media platform for sharing videos. Instead it has become somewhere for “stars” to take a shot at fame only by posting vlogs. It is now plagued with advertisements and sponsored videos due to the fact that average people are looking to earn money. YouTube should be used as a recreational platform. Therefore, vloggers, no matter how popular, should no longer rely on YouTube as a source of income because it is not a financially responsible decision.

Art worlds are designed to be enjoyed, not for the sake of making a profit. YouTube in particular was designed to ease the way people can share videos with others. However, over the years YouTube grew more and more until reaching the state it is currently in. Specifically, YouTube is full of people publishing videos of things that go on in their lives. Over time, these lifestyle vloggers gained validation for themselves from viewers, which lead to millions of views and followers. However, lifestyle vloggers truly only benefit themselves and their search for fame. Vloggers of all varieties should be advised that YouTube is intended for recreational use. In summation, all art worlds are designed to incorporate collaborators, a set of conventions, resources, a style of distribution, and a method of judgment. With YouTube specifically, there are countless collaborators, an evolving set of conventions, simple, yet expensive, resources, a simple distribution system and a judgment system which heavily involves public opinion.

“How Many Views Does It Take to Make Money on YouTube?” Video Power, videopower.org/how-many-views-to-make-money-on-youtube/. Accessed 27 Feb. 2017.

“Why Was YouTube Created.” Why Center, http://www.whycenter.com/why-was-youtube-created/. Accessed 27 Feb. 2017.